Anne-Sophie Lohmeier   or  Aerialistik as she calls herself,  is an aerial silks performer and teacher  from Munich. In this interview you will learn about her interesting way to aerial arts.

1. How did you come to aerial arts?

How long have you been doing aerial silks and what have you done before?

When I studied in Buenos Aires (2005), I saw an aerial silk performance for the first time. The silk hung on a tree in a park. I was totally impressed by the flying lightness that the girl transmitted through her aerial dance. After the performance I told her how much I liked her performance, she invited me to come to her class once a week in the park and try it out. So each Saturday I made a long trip with the train to take 1 hour silks class. Since then I never stopped training.

2. What is the difference between circus scene in Germany and Argentina?

In Germany they distinguish between the “professional” aerial artists and “semi professional”, that is those who make their living not only from aerial acrobatics. This comes from the distinction between the “New circus” (“Neues Zirkus”) und Cirque Nouveau according to the French tradition, which is regarded as “the serious circus”. On the other hand, they don´t acknowledge the art by the new circus artists, who don´t suit into it the circus communities. I find this classification very sad.

This separation is accompanied often with the distinction between “new circus”, the close to the Cirque Nouveau is based in France and is “serious” circus and on the other side of the circus-makers who do not fit there and therefore often not as an art form  to be considered  seriously. I find it a pity   and one-dimensional. Unfortunately it often causes difficulties for those who   have to fit into the new or contemporary circus to be  taken seriously as artists.

In Argentina almost nobody makes their living only with aerial acrobatics. One lives for circus though has to make money with other jobs. As the circus is not the main income source, one doesn´t has to do certain things to fit into and to make a career. Circus there is a way of life, people meet in a park and train and spend time together . That´s why the scene in Argentina es different from that one in Germany. In Argentina it´s more multifaceted and bigger. I suppose that it is the reason why I came to circus in Argentina and not in Germany.

3. With which aerial apparatus do you train?

What do you like the most:  Aerial Silks, Aerial Hoop or Aerial Rope? Why? Do you also do something else besides aerials, like, for example,  dance or yoga?

I train mostly aerial silks, in the second place trapeze and sometimes I try out floor acrobatics, but it´s sure that the silks is my favorite where I have more connection. Aerial silks allows so many aesthetic and expression ways, at the same time fascinating with its lightness of a fabric. Besides that I like yoga, dance, for example, Tango Argentino. 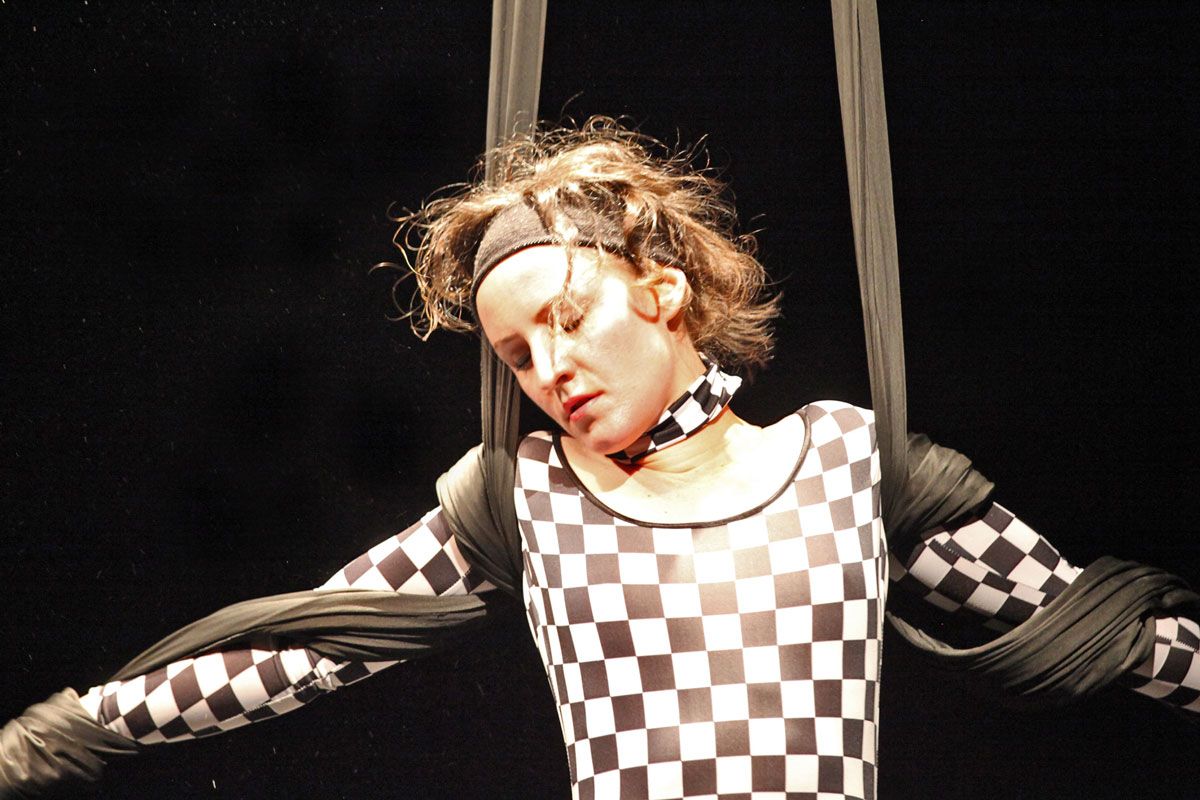 4.  How long do you usually train?

I train approximately 2-3 times per week for 3 hours.

5.  In which countries  have you performed?

Can you share some interesting episode from your performances ?

I performed many times in Córdoba and Buenos Aires in Argentine, as well as in different places in Bayern – Passau, Eichstatt, Munich and other cities, also in Poland and Palestina. Usually I perform at festivals and   at marketing campaigns, for example for BMW Mini. The most interesting show I had in Palestina, because me and my partner Kathrin Müller were the only women and were not sure what costumes that doesn´t go against religion or culture to put and in such a way that is doesn´t hinder the movements on silks. From the very first month we noticed the excitement of the public and it encouraged us in our performances.

Another unforgettable performance for me was my show for Mini BMW in the Freizeithalle in Munich, where I had to put a costume with lights for my music and the spirit of the show. I was nervous about the lights, but they ignited exactly at the right moment.

6.  How aerial dance influences your lifestyle and nutrition?

Of course I eat mindfully and to the measure as aerial acrobatics takes a lot of energy and effort. Usually I just listen to my body and if it wants a hamburger or fried potatoes, I respect it.

7. Which aerial artists inspire you?

Mariana Sanchez is my inspiration, she managed to bring her dream into reality and to organize an aerial space with aerial apparatus and never lost her passion for circus. I also admire Emiliano Ron, aerial rope artist who now lives in Europe. The rope for him is his life, he takes care of his life and his body. (??) Both of them have kept an optimistic attitude about life in spite of the difficulties. This is very difficult for the Germans.

8.  How much time do you need to prepare a performance?

It all depends. At the moment we work on the piece that we want to present in summer. It´s important to have time to try out with forms, to play and to try some cool stuff in the air all together. What is also good is to have a deadline, like for example a festival project. What I also like is to let me be surprised be the music and the public. At the Wannda-Festival in Munich it´s very exciting. I decide one week before if I perform or not. I think out the costume and the music, and the rest happens at the moment. I don´t know which music will come, nor who will be the DJ. Moreover there is no scheduled time for my performance which makes it so spontaneous. I´m fascinated from the dynamics and just-once performances that lets me develop new movements and choreography. That´s why my performances at Wannda Festival are so exciting for me. 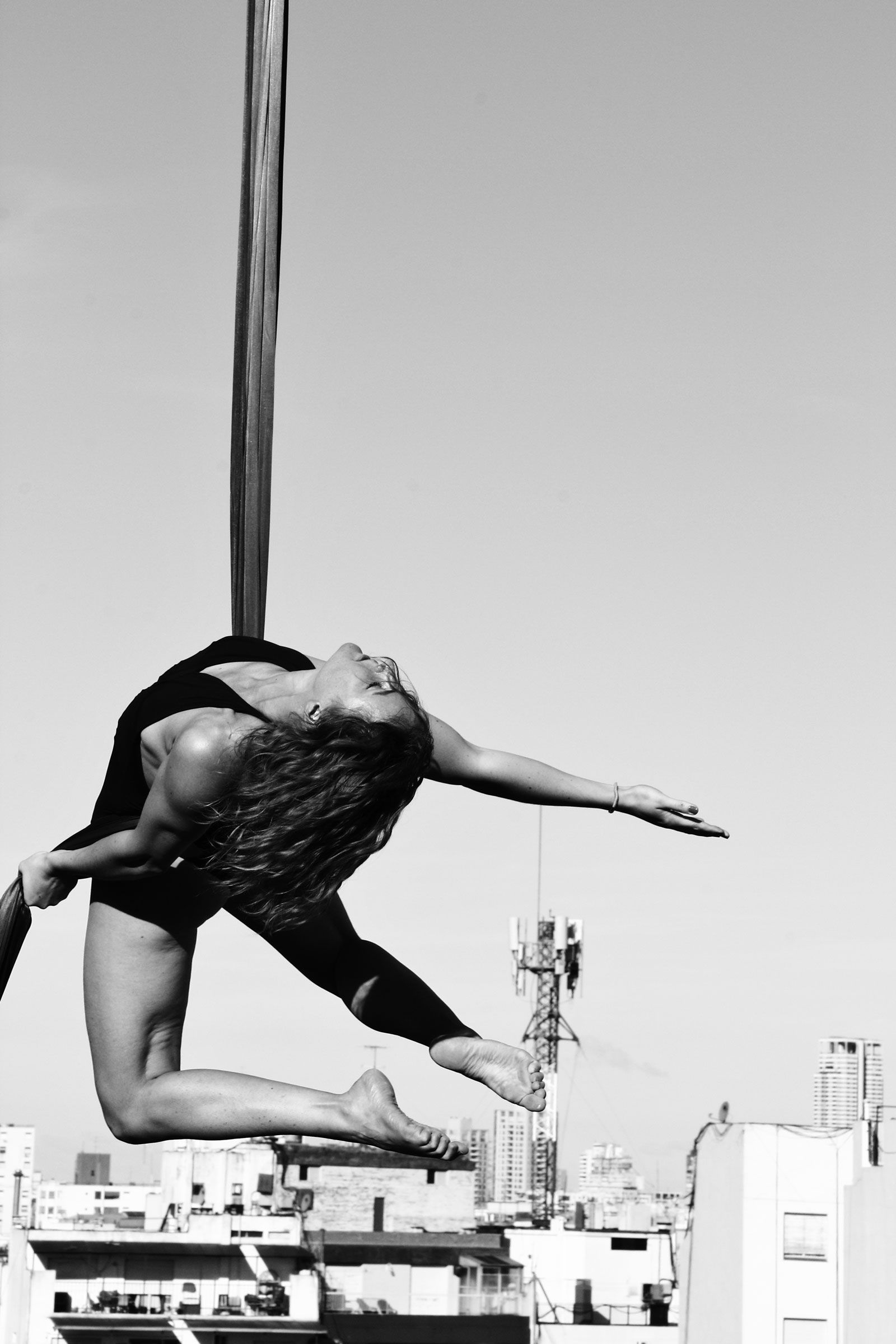 9.  Do you work more with agencies or do you get the most of performances through your contacts?

I get the most of performances though my personal contacts and seldom from the agencies.

Accessories, music and a as much calmness as possible, thought sometimes it´s challenging.

11. How long do you warm-up before your aerial silks show?  What is important to consider for a good warm-up?

It´s not always easy, but at least for 10 minutes. Try to think about your whole body, though little time can make you nervous. Many event organizers often just don´t understand the importance of a warm-up.

12. What are the best ointment   for aerialists?

I use Bepanthen for skin injuries and Voltaren against pains.

13.  What training tips can you give to the   readers?

Personally I like all possible strength and flexibility exercises directly on the silks.

Anne-Sophie prepared 2 videos with tricks. You can watch them here:

Elen Ramirez is the founder of Activonga, aerial artist, life & business coach. I help people to optimize all the areas of their life, overcome limiting beliefs, reinforce their vision and goals. I also help with marketing and websites.